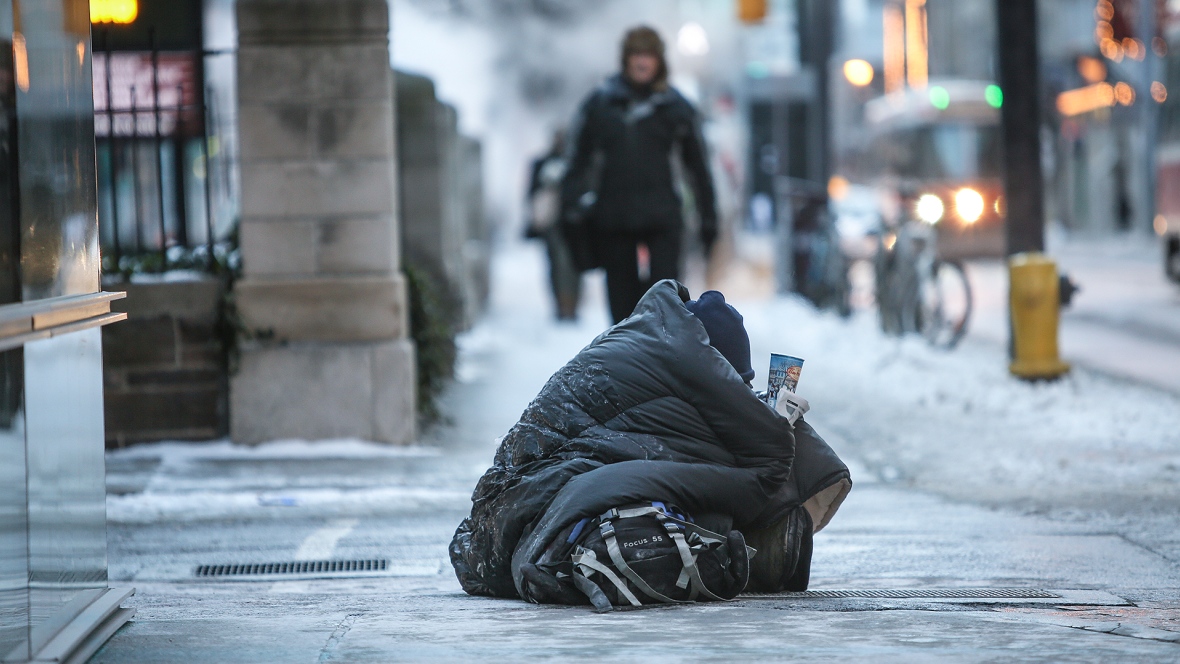 Homelessness in this city, and really in most cities, has often been categorized as an unsolvable, ongoing crisis. Everyone knows its an issue, but it seems to me like we’ve never been even close to solving it.

There are an estimated 5,200 people living in unstable housing conditions on any given day in Toronto. In 2016, over 16,000 unique individuals needed to use the city’s emergency shelter system, and approximately 4,800 people spend the night in one of these shelters every day. With the increasing housing unaffordability in Toronto one could only imagine this number has increased in the two years since then.

These are their options:

This is a map displaying all of the city’s active shelters (according to their latest open data release). Each shelter’s size on the graph is determined by it’s capacity, and the colours designate the type of people that they serve.

According to these stats, there are only 59 shelters dotted throughout the city ranging in capacity from five to over 130 people. Is this really enough?

The stats show it isn’t, nearly 100 total homeless have died in 2017. Furthermore, these numbers have been steadily climbing over the last ten years. Which is incredibly apparent when we look at the number of deaths reported in Toronto shelters over time:

This past winter season the city’s crisis came to the forefront of the media spotlight. The incredibly cold temperatures incited an outpouring of online and offline activism calling on the city to do more to meet shelter demand. Most notably lobbying the different levels of government to open the Moss Park Armoury as an emergency shelter. The city and federal government did come to an agreement, and opened the armoury and other locations on January 6th.

But despite this, shelter advocates demand there still aren’t enough beds. This is not even beginning to mention that winter warming stations have failed to meet basic human rights standards, the rampant opioid epidemic, and an incredibly alarming mental health crisis.

In short: our current efforts are not sufficient.

So what can we really do? The city is adamant they don’t have enough money in the city budget, and traditional nonprofits are already stretched thin.

This is where I believe civic tech can step in.

Civic tech is a growing movement of involved citizens that want to use the power of technology to tackle civic issues. There are a growing number of these communities popping up across the world and Canada. I primarily attend the CivicTechTO, the first Canadian one, and have found it wonderfully refreshing.

The biggest issue I have with most programmers is that they’re typically politically apathetic. They don’t have an issue with volunteering, most people have no problems contributing to open source projects. But most of this work is insular in the sense that it stands to only benefit other programmers. Why can’t we be using our experience and skills to build things that tackle real issues in society?

This is why I fell in love with the ethos behind civic tech after coming to my first meetup. Just tons of people, coming in to meet week after week, hacking away at projects that actually contribute to society in positive ways.

And it’s this creative use of technology that influenced the way we’re trying to tackle homelessness with the Chalmers Cards project. 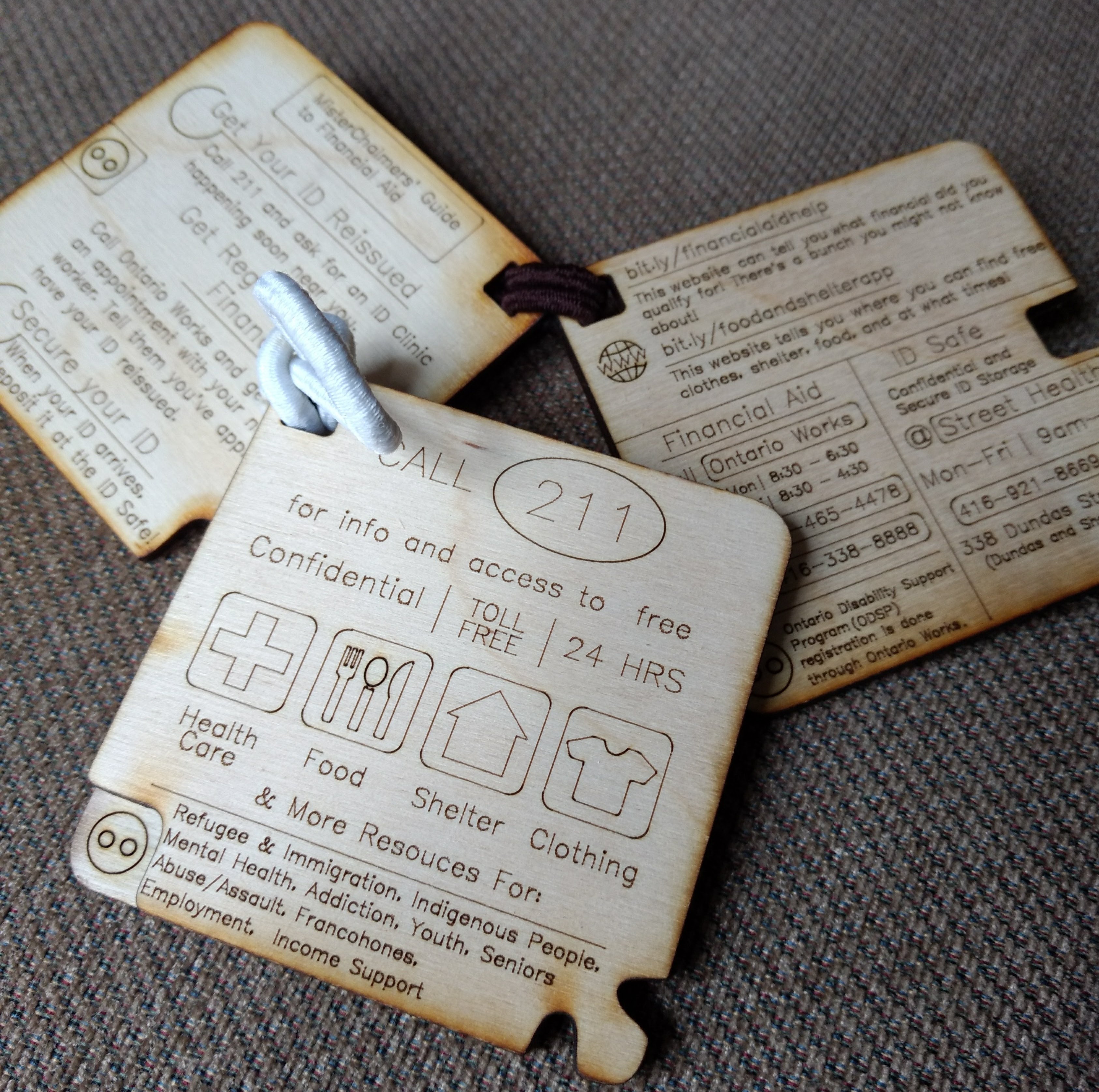 Chalmers Cards is a guerrilla street project that aims to distribute information resources to the thousands of people living in unstable housing conditions. Many of people living in these circumstances are often not very tech literate, and so they may not be aware of the countless public and nonprofit resources that are available to them.

We aim to help combat this by creating laser cut wooden handouts etched with a variety of shelter, legal, financial, food and clothing services that people can easily access. The city can do all this work to set up public programs or building shelters, but it means nothing unless people on the street know how to access them.

The idea makes use of an ecosystem only a fairly large tech city like Toronto can provide. The cards are made of scrap wood and owes its continued production due to the easy accessibility of nonprofit maker/DIY spaces here. Without these, a project like this could never get off the ground.

Now this is a project with a very simple premise, but could undoubtedly have a huge impact. And I think its this type of thinking that a lot of people working in tech could benefit from.

There doesn’t always need to be a cutting edge, over engineered piece of software to solve critical societal issues. Sometimes the best approach is just a creative reimagining of a current technology, or leveraging existing resources and putting them to good use in another domain.

Its this type of thinking that we hope to continue using for Chalmers Cards and other future initiatives we plan to do around the city.

But the message is clear: we need to do more to solve the homelessness crisis.

My hope is that our project will be part of a growing movement to help combat this. We’re actively redesiging the cards to better effectively help people in need. We’re collaborating with another civic tech group that wants to better map shelter bed spaces. And this isn’t even beginning to scratch the surface of the countless activists, nonprofit groups, and public servants dedicated to the cause.

I hope we can inspire more people to help out, because as long as people continue to sleep and die on the streets: our work is not done.